Preserving your catch: Keep your fish fresh for longer

by fishingreports
in Fish, Most Asked Fishing Questions
1

The ocean has been feeding humans and animals alike for thousands of years. Beneath the deep blue lies a bounty of tasty treasures. The commercial harvest of shellfish, finfish, crustaceans and ocean vegetation is one of the oldest professions in human history. From the ancient Greeks dragging nets along the beach to current day New England lobster-men hauling in their catch in wire traps, the essential premise hasn’t changed much; take it from the sea and eat it while it’s fresh. What if we’ve been doing it wrong all this time? What if there is a way to ensure our catch is as fresh as possible and lasts for weeks rather than days? In this article we’ll go over a few lesser-known practices to preserve your freshly caught finfish.

How do I kill a fish after catching it?

The standard method to killing a fish is simple and accounts for over 90% of all methods, asphyxiation. If you want to take additional steps you can bleed and gut your catch then put it on ice. For years this was simply the accepted method and across most commercial fisheries still is. When a fish is pulled from the water it has only a few minutes before its dissolved oxygen levels in its blood deplete and the fish begins to suffocate. It has been proven that fish do in fact experience stress. While they’re suffocating they’re also going into stress overload, dumping anti-stress hormones like adrenaline and cortisol into the bloodstream. This, in turn, creates a massive build-up of lactic acid in the meat of the fish. This lactic acid aggressively accelerates the breakdown of muscle tissue and fat, causing the meat to sour and become “fishy” very quickly. Luckily, there is a simple technique to drastically slow this process and eliminate these hormones from ever being released. This technique is called “ikejime” and is absolutely the best method to kill your fish.

Ikejime is a Japanese technique and roughly translates to “killed with spike”. The thought process is simple; kill the fish before suffocation occurs, stress hormones are released and lactic acid taints the meat. The first step is to stab a narrow spike between the eyes, into the brain. You’ll know you hit the brain when all of the fins seize and flare up for a few seconds, then slowly release. The fish is now brain dead and cannot send any signals to release anti-stress hormones. You still want to take an additional step to literally sever ties to the nervous system. Going in through the same spike hole between

the eyes, you want to run a small rigid piece of wire straight back along the spine. You can also do this from the tail up towards the head. This will cut any nerves still intact with the spine. Once you’ve done these steps you can begin to properly bleed the fish. First, cut the gill arches on the side and bottom of the gills. Then, make a perpendicular cut about an inch away from the tail, until you hit the spine. This will cut the main artery. Now because you’ve severed the remaining nerves from the spine already, the blood will not spot in the meat. It will be drawn towards the cavity of the fish and drain much more proficiently. Hold the fish upright from the tail and try to fill the gills with water to help the remaining blood drain.

How do you store fish before you filet it?

At this point the meat on your fish is in excellent condition and will be fine as long as it’s kept cold until processed. Why not go the extra mile to ensure absolute freshness? Rather than simply putting your fish on ice, I like to make a saltwater slurry or brine to keep the fish even colder. Add sea water to your cooler with ice at a 1:1 ratio. Some people like to add iodized salt, but I find this unnecessary. Submerge your fish so it is completely surrounded by water, or the best that you can. The saltwater slurry does several different things. The salinity from the saltwater lowers the freezing point of the water. This essentially makes the water colder without freezing. Being completely submerged helps draw the remaining blood out and keeps any air off of your fish. The fish will firm up and become rigid, but not frozen and much easier to filet. Because your cooler was full of water it makes cleaning up that much easier too!

How do you fillet fish?

Now that you’ve prepared your fish using the Japanese ikejime method and kept it in a saltwater ice slurry, it’s time to remove the filets you’ve taken such great care of. I use the same process for every species of fish I fillet. First you want to make your outline cut on BOTH sides of your fish before actually removing a fillet. This way when you flip your fish over after already removing a fillet on one side, you have already started your outline cut and don’t have to try while the fish is lopsided.

The first cut I make is just behind the eye and ran diagonally down about an inch behind the gills. Once you’ve gone about halfway down the width of the fish I angle my blade very shallow so you can cut out the rib cage and the side of the cavity. I then continue the outline cut by only inserting the tip of the knife along the bottom of the fish to the tail. I follow up the existing cut where you bled the fish earlier and continue the outline along the top edge of the fish along the dorsal ridge until I meet my original entry cut, just behind the eye.

As I mentioned earlier, be sure to flip your fish over and make the outline cut on the other side as well before removing the fillet. To start the fillet removal, make a few cuts at your entry point behind the eyes until you feel the skeletal rack touching the edge of your blade. Holding the fillet with one hand run your blade downward along the skeletal rack with a clean precise cut until hitting the spine with the tip of your blade. Hold the fillet away from the rack and continue cutting back towards the tail. Repeat the same process from the bottom of the fish starting from the tail end, working your way forward. Once you’re near the cavity, angle your knife so it’s very shallow and you can cleanly remove the remaining attached meat from the cavity and rib cage.

At this point you should be able to peel your fillet from the carcass with ease. Flip your fish over and repeat the process, following the outline cut you’ve already made. The next step is to remove the skin from the fillet. Always sharpen your knife again before de skinning. Place the fillet skin-side down on a flat surface. On the tail end of your fillet, cut down to the skin while leaving about a half-inch piece of meat on the very end. This will be your “handle” when removing the skin. Angle your knife so it’s almost completely flat. Simply hold firm pressure on your blade and pull the skin piece away while “wiggling” the knife gently. This should cleanly and easily remove the skin in one piece. Some people like to remove the “bloodline” where the meat was touching the spine. If you successfully executed the ikejime technique, the remaining blood spots are so minimal I consider this step unnecessary. 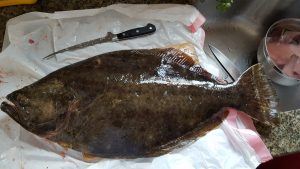 For those that love high quality seafood, it’s important to take pride in preserving your catch successfully. The result in the entire process is a piece of almost entirely white meat, with no off colors and very minimal blood stain. The quality and freshness of the fillets will last weeks rather than days. Ditch the old method of suffocation and standard icing. Take the extra few minutes to implement the ikejime method, bleed your fish out entirely, make a saltwater slurry, and fully submerge your catch. When filleting your catch be sure to make an outline cut on BOTH sides before removing a fillet. Cut along the skeletal rack, remove most of the meat and make a shallow cut to avoid the ribs and cavity. When removing the skin, hold the blade nearly flat and pull the skin rather than slicing with the knife. Take these few steps on your next fishing trip and you’ll be amazed at the quality and freshness of your fish.