There were reports of nice Tuna off the waters of Newport, RI.  Were you able to snag one? 401 Fishing Reports didn't get out there fast enough to see them.  archangel charters reported the small tunas.

The fishing off Newport has been nothing short of amazing. The coast and the mouths of the Bay and the Sakonnet River are loaded with good-sized Albies along with a few quality bluefish mixed in. Some feeds have been large while others have been smaller and more isolated. In either case, they are not shy and are willing to bite a variety of offerings. Williamson lures Goname jig has had the most success, matching both peanut bunker and anchovies. Tautog fishing has been steady and will only pick up as the water begins to cool. We've seen fish up to the 9/10 pound mark in 25-35 ft of water. Big sea bass and scup have been welcomed by catch. Striped bass fishing has been less consistent. There are still plenty of quality fish around if you put the time into finding them. Some dates are still open in October during the peak of the fall run. Book now 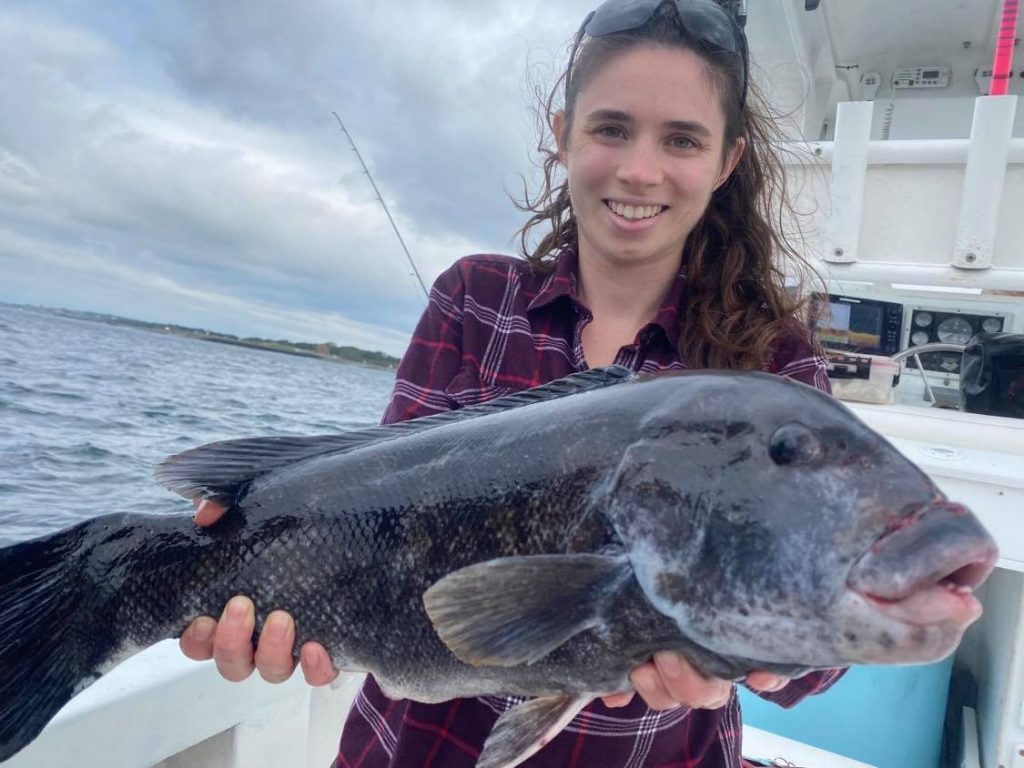 Capt. Connor from Tall Tailz Charters reports - The cold front that came through this week cooled the waters back down to normal temps to jump-start the fall run. Out front, Newport and the bay are loaded with rain bait. The topwater bass bite has been insane with massive topwater feeds happening all over.

Some feeds are only big bass while others are mixed in with smaller bass and bluefish. The seasonal hardtails should be filling RI waters soon. Block island striped bass fishing has been incredible with big fish around 40-50 pounds the norm. Tautog fishing has also started to heat up with fish starting to move out front in very good numbers.

The amazing fall fishery here In Rhode Island is nearly upon us! 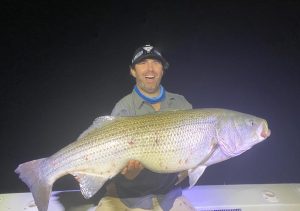 8-14-2020
Capt. Connor from Tall Tailz Charters reports: Striped bass fishing remains hot, but so do the water temps. Bigger fish are more Hesitant to bite than smaller fish. Overall, fish from schoolie to over 40 lbs are still being caught regularly off Newport. Block Island striped bass fishing is in prime season. With cooler water temps around 71°, the waters around the block are covered in nice bass to over 50 lbs.Sea bass and scup fishing is red-hot off Newport. The fluke bite is finally starting to produce quality keepers if you put the time in.
Also, cobia are being caught along many of the typical striped bass haunts

Striped bass fishing hasn’t slowed down a bit, there is plenty of slot fish for those looking to take some meat home, and we have also seen an increase of larger fish in the 30-40-pound range.

Live bait has remained a top producer, but the tube and worm on the troll have been producing as well. There are still some true gator blues mixed in, although they’ve thinned out a bit. Fluking remains tricky on the usual haunts, due to an abundance of shorts, you’re the best bet is to work smaller pieces of structure and use tight drifts when you find some keepers.

The nearshore shark fishing has been great with loads of blues and makos within 10-20 miles. 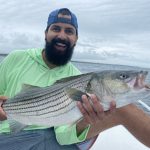 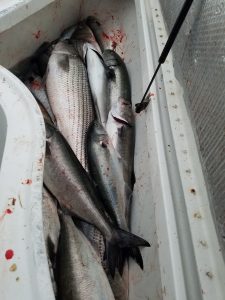 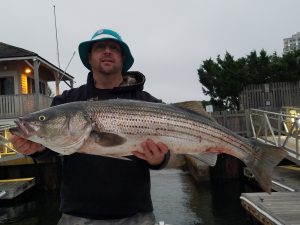 6-25-2020 Buzzards Bay MA - Last week we went out with Capt. Mel from Fishnet Charters. His fishing charter is based out of Mass. He does a lot of fishing and charters in Rhode Island though. We left out of Taylor point marina in Buzzards Bay.  Sea Bass was hot and heavy. Also, we caught a lot of jumbo scups.

Two reports from Capt Mike Littlefield from ArchAngel Charters and Connor from Tall Tailz Charters
Mike reports the Striped bass are hitting live porgy around 545PM till around 9 PM.  The morning run has been good too.
Connor reports on bottom fishing. Sea bass is everywhere from 30-100 ft. Larger numbers around 60-70 ft. A few cod are Still mixed in. Fluke is holding on to deep water drop-offs.

5/31/2020 Out in front of Newport there were a lot of sizeable sea bass - A LOT of babies out there. A couple of sizeable flukes. COD was mixed in there as well. Thankfully no sea robins this time around. Inside the bay, towards the MA line, we only caught one 34 in striped bass.  We were not marking them as we normally do this time of year.

. Schoolies are everywhere north of Newport bridge, water temps are perfect now and fish are starting to cooperate.